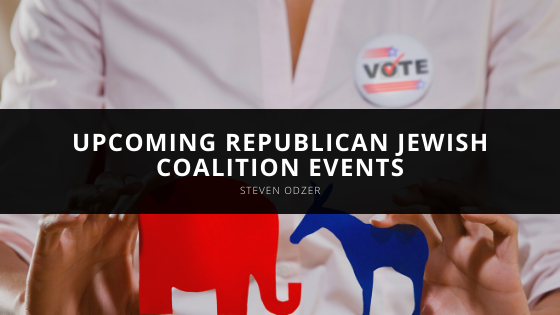 Ever since 1985, the Republican Jewish Coalition (RJC) has made it its mission to connect the Jewish community with Republican decision-makers. After almost 35 years of operation, the RJC has chapters all over the country, such as New York, Pennsylvania, Chicago, Florida, and California. Each office hosts special local events allowing local supporters the opportunity to engage in activism and advocacy opportunities.

In the upcoming months, the RJC will host several events around the country. The RJC will host their Fall Leadership Meeting in Washington, DC, this upcoming November 20th. The meeting will feature guest speakers such as House Minority Whip Steve Scalise, Senator Todd Young, and others. Although there will be more details in the upcoming months, the 2020 RJC National Leadership Meeting will take place in Las Vegas, NV.

The RJC also offers events such as a conversation with famous and influential authors. On November 21, Newt Gingrich will speak in Plantation, FL. Also, on December 8, New York Times bestselling author Michael Medved Michael will present his new book, God’s Hand on America. This event will take place in Sandy Springs, GA. All of these events and more will be posted on the RJC’s events page.

Besides being a supporter of the Republican Party and other worthy causes, Steven Odzer is the CEO of YBT Industries of Henderson, NV. He founded this company after over 30 years in the distribution industry. Steven Odzer is a story of success and inspiration, “I started my first company at age 18 out of my parents’ basement,” he says. His dedication earned him the title of the Ernst & Young Entrepreneur of the Year in 2000 in the area of distribution.

Steven Odzer also splits his time between cheering on the New York Yankees and the Las Vegas Golden Knights. Despite having a full-plate of activities, he still likes to spend quality time with his seven children and nine grandchildren.