Steven Odzer attended the Economic Club on Tuesday, November 12, 2019, where President Donald Trump was a guest speaker. “My table was right in front of the dais. I’m a strong supporter of the Republican Party and the RJC, so it was an honor to attend the event.” As an active supporter of the Republican Party for many years, Steven Odzer shares his takeaways from Trump’s speech. 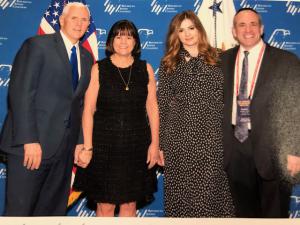 Moving Production Back from China
Steven Odzer has worked in the distribution industry since he was 18 when he started his first company out of his parent’s garage. He agrees with President Trump that the world is a competitive place, but it’s important to help Americans succeed. President Trump talked about his plan to move production factories back to the U.S. and help the American People.

The Current U.S. Job Market
As someone who has been in the distribution industry for over 30 years, Steven Odzer pays close attention to the overall job market of the country. President Trump mentioned how Americans are now forced to work two or three jobs and make a lot less money than they made 21 years ago. However, due to recent changes in the market, “A record number of Americans are quitting the job they had to take the job they like even better … This increased competition is driving up wages for blue-collar workers,” said the President.

The U.S. Economy
As the CEO of the new YBT Industries of Henderson, NV, Steven Odzer is affected by fluctuations in the economy. A takeaway from the speech is the mention that the American economy is headed for an “economic boom.” President Trump said, “We have ended the war on American workers, we have stopped the assault on [the] American industry, and we have launched an economic boom the likes of which we have never seen before.”

Trade Relationships with Other Countries
Since this is part of his industry, Steven Odzer pays close attention to trade relationships with other countries. He shares the opinion with President Trump that many countries charge the United States with exorbitant tariffs or make it impossible for trade.

Aside from supporting the Republican Party and the RJC, Steven Odzer also supports the AHRC Foundation, Bris Avrohom, Jewish and Non-Jewish causes, and Arab/Jewish business cooperation. When he’s not making a difference in the world and his community, you can find Steven Odzer at a New York Yankees game or cheering on the Las Vegas Golden Knights. He also loves to spend quality time with his seven children and nine grandchildren.