Stephen Odzer is a businessman with over 30 years of experience in the distribution business. Aside from becoming an entrepreneur at the age of 18, when he started a business out of his parents’ basement, Stephen Odzer loves his community. Stephen Odzer is an advocate for several organizations such as the AHRC Foundation, Bris Avrohom, Arab/Jewish business cooperation, and many other Jewish and non-Jewish causes. As someone who likes to do right by others, he wants to encourage others to become advocates for worthy causes. Stephen Odzer explains how to become an active advocate. 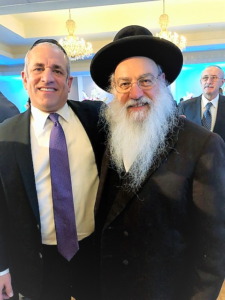 Decide What You’re Advocating For

According to Stephen Odzer, who advocates for Jewish Immigrant causes, the first step is to know exactly what causes you want to advocate for. Once people find a cause they want to fight for, they need to immerse themselves in the cause to understand why they want to support it. It’s important to conduct research to understand the source of the problem, what people are doing to remedy it, and reach out to the people affected.

Use Your Tools to Your Advantage

Stephen Odzer recommends everyone who wants to become an advocate uses every tool at their disposal to support their cause. For example, as a businessman with over 30 years of experience, Stephen Odzer can take advantage of all the contacts he has made over the years. He explains, nowadays, people can use technology to their advantage and advocate for their cause. Many people now take advantage of YouTube, Twitter, and Facebook to bring awareness of the issues they care about.

Narrow Down Your Message

Although many people think the issues they feel passionate about are specific, they also tend to be quite broad. Stephen Odzer believes when the message is concise and clear, it resonates with more people. The best way for advocates to make an impact is by narrowing down their message and sticking to it. This approach will help them reach a wider audience, rather than bouncing around hoping something sticks.

People Have to Know You Care

When you’re new to advocating for a cause, Stephen Odzer recommends you show people you care. How can you expect them to care about it if you don’t believe in it yourself? For example, you cannot tell people to recycle when you don’t do it. People also care about personal stories. Stephen Odzer believes in helping Jewish causes because he has a lot of family in Israel. Sharing his personal experience shows people he cares about the causes he supports.